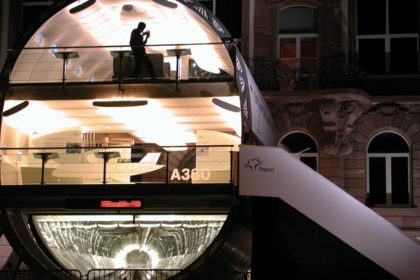 How the first A380 was created in Switzerland

It was already 15 years ago when HP Gasser AG took on a special challenge in the Membrane Construction division. A 1:1 scale model of a fuselage section of the new Airbus A380 was to be built, giving a lifelike impression of how it would later feel in the real aircraft. This is no everyday business for a specialist in membrane construction, especially not when it comes to a model that is not only to be looked at and marveled at, but also to be walked on.

Prefabrication in Lungern/CH, location in the Senckenberg Museum in Frankfurt am Main/Germany

The unusual order was accepted with some excitement and at the same time a great deal of pride. It was clear from the outset that the model of the A380 fuselage from Lungern was not just to be an elevation model. Everything had to be done in such a way that, after final assembly, real people would be able to sit in real seats. Even the smallest details had to be taken into account to give an identical impression of flying in the A380. The aircraft was not even available on the market yet.

So the model construction specialists in Lungern set about rebuilding a section of the A380’s fuselage part by part, as it were, according to the manufacturer’s specifications. The trick was also to produce the entire object in parts that had to be brought to Germany for final assembly. It was only in Frankfurt that the model was finally to be assembled and made available for use by interested parties. A task that made the challenge in model making even more exciting. Ultimately, the entire project had to be planned and implemented in great detail.

From the award of the contract to the installation and handover at the Senckenberg Museum in Frankfurt am Main, there was a very small time window. And yet, high-quality, absolutely precise work was expected, which would be more appropriate for an aircraft manufacturer than for a company in the field of membrane construction. So the specialists at HP Gasser AG set about implementing a project that was more unusual than commonplace.

In the Swiss precision coveted worldwide, the individual parts were manufactured with millimeter precision according to the drawings assembled in small subassemblies and then transported to Frankfurt am Main. There, a team was already standing by, which now had to precisely assemble the individual parts. Precise prefabrication at the Swiss factory in Lungern was the prerequisite for the fuselage section model to be assembled perfectly in Frankfurt. Even though the allotted time was very tight, the 1:1 model presented itself on time for the agreed handover date as a lifelike model of a section of the Airbus A380, which could now be marveled at and tried out by interested parties and potential customers.

In addition to the pride with which the employees and managers of HP Gasser AG look back on this special project, one realization also remains: Exceptional solutions require exceptional partners who can provide equally exceptional services. HP Gasser AG has proven that it is one of these special service providers and that it is always fully involved in the solution of even difficult projects, not only with the model of a fuselage section of the Airbus A380. Many other projects prove that at HP Gasser even the extraordinary is possible. We will also present some of such projects to you in succession.

Tagged under: A380, History, Prefabrication 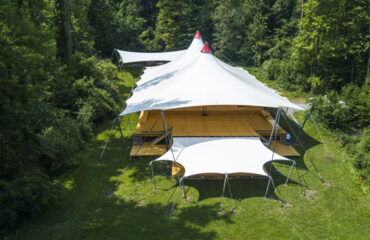 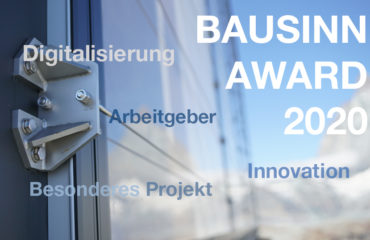