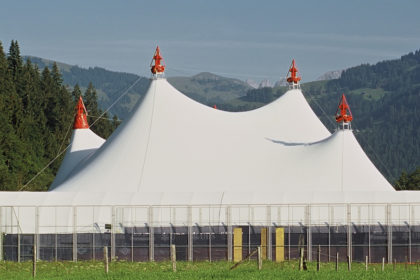 HP Gasser AG turns the temporary solution into a permanent one

Since 1957, the Menuhin Festival has held a special place in the world of music and culture in the Saanenland region, especially in the community of Gstaad. Every year, artists and audiences meet here for a rendezvous of classical music and selected chamber music. What started out as a rather small concert series is gaining more and more friends every year and also enjoys an increasingly significant international reputation. It’s no wonder that the flocks of festival friends are growing larger and larger, and the space for the audience in the churches, small halls and in the monasteries in and around Gstaad is becoming increasingly cramped.

In 1989, the “Alpengala AG” and the “Gstaad Menuhin Festival” merge to form the “Musiksommer Gstaad-Saanenland AG”. Alpengala AG also brings a large festival tent from SarnaTent to Gstaad, which was previously used in Wengen. So it is now also possible to organize large symphony concerts. However, only during the festival itself, as this festival tent is designed as a summer-only tent.

In 1999, Sarna Tent is taken over by HP Gasser AG. Now the responsibility for the Gstaad festival tent also falls to HP Gasser AG. It meets the new challenge with an impressive, very special solution. The tent is to become a concert hall.

Impressive membrane building for multiple use

In tailor-made specialist work, a festival tent is being built as a venue for large concerts and events in August 2000, which will set the tone not only with its extraordinary architecture, but also with its impressive size and functional equipment.

In a square of 44 by 44 meters, a footprint of almost 2,000 square meters is built over. The main masts are a full 24 meters high. The suspensions are located at five high points at different heights. A side extension with a further 480 square meters and the extension to the tennis hall with an area of 220 square meters complete the impressive membrane structure. The tent membrane itself is made of a high-strength, opaque polyester fabric coated on both sides with PVC for weatherproof properties. What in its outer form is reminiscent of the mountain ranges of the Swiss Alps and fits excellently into the natural environment, offers space for up to 2,000 visitors on the inside. These are numbers that give an idea of the grandeur of this venue.

To avoid the annual extremely costly assembly and disassembly for the future, HP Gasser AG is already modifying the festival tent after the first season so that it can remain assembled throughout the year and be used year-round for various events. This requires some modifications and an emergency concept for the winter, when the large tent roof has to be cleared of snow.

With the new festival tent, Gstaad gained a venue in 2000 that has already paid off many times over the past 20 years. Not only as a concert hall, but also as a perfect location for other events such as presentations, banquets and similar occasions, the striking membrane structure offers excellent conditions. Sliding partition walls, for example, can always be arranged as the occasion requires, and attractive lighting solutions ensure an extravagant atmosphere in the huge tent. The whole thing is rounded off by a stable floor structure made of precisely fitting wooden elements, which do not impair the acoustics but ensure that the floor is always firm.

With the festival tent in Gstaad, HP Gasser AG has already proven in the first year after the acquisition of SarnaTent that membrane construction and custom construction are in exactly the right place here. Customized products even in oversized dimensions are one of the strengths of our company, of which we are rightly very proud. This is also evidenced by other outstanding projects, which we are pleased to present to you again and again. 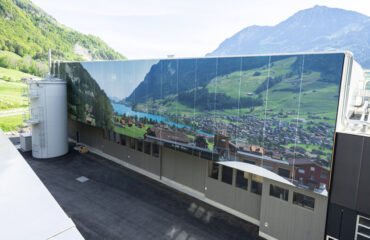 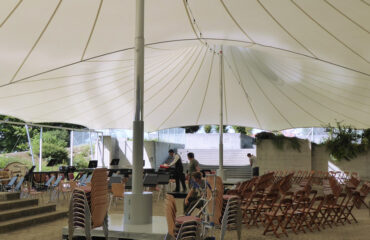 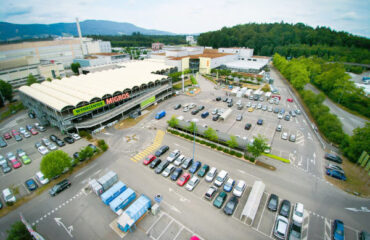 For dry customers, purchases and cars